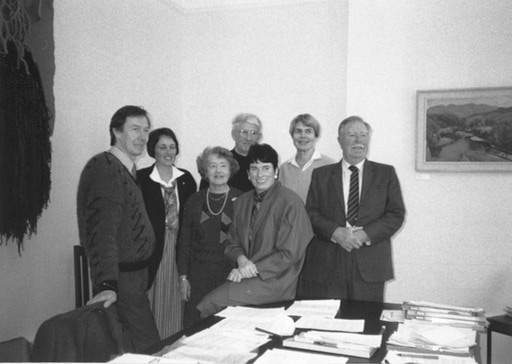 The first Public Advisory Committee on Disarmament and Arms Control appointed in 1987, which included (l to r) Dr Neil Cherry, Kate Dewes, Dame Laurie Salas, Dr Rod Alley, Dr Robin Briant, former Minister of Defence Frank O'Flynn. Other members were Manuka Henare and Mary Woodward (not in the photo).  Chair was Fran Wilde, seated at front.  Courtesy Kate Dewes
Dame Laurie Salas was an inspiration to me as the youngest member of the first Public Advisory Committee on Disarmament and Arms Control (PACDAC) appointed in 1987.  Her years of experience in, and membership of, various peace and justice movements such as WILPF, UNA, National Council of Women, stood her in excellent stead. I watched with delight as she cajoled Ministry officials and government Ministers into taking strong action on contentious disarmament issues such as the World Court Project, Black Birch Observatory, the frigates and Waihopai.  She knew how to draft effective and strong resolutions and to work well with a diverse committee membership. She was one of only two people who were appointed to PACDAC for three terms (nine years) She was also an extremely active member of the 1986 UN International Year of Peace National Committee chaired by Sonja Davies.

She was always nurturing and supportive of younger women peace campaigners, and gave of her time and wisdom generously to many individuals and groups.

Dear Laurie, you will be missed but not forgotten!
Kate Dewes

I appreciated my long friendship with Laurie.  We had many long fruitful debates.  I acknowledge the wonderful work Laurie did for the disarmament section of WILPF.
Pauline Tangiora